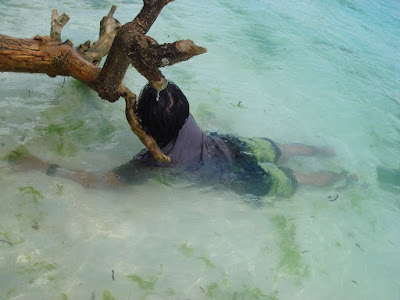 March 21, 2008 Mylene Leave a comment
We really had to wake up early to pack (we did not bother packing the night before since we were still waiting for our clothes to dry hehe) and so that we won’t be late for our flight. By 5:30 AM, we already checked out of the resort and we are on our way to the airport. By 6:15 AM, we have checked in at the Tagbilaran airport. While waiting for boarding, we were entertained by a group of blind people serenading us with songs. They were good. Nakakatuwa talaga sila. It’s very touching and inspiring to see them happy despite their being blind. The flight took off at exactly 7:30 AM and we reached Manila at 8:45 AM.
It was fun fun fun! We really had a blast. We were out on tours most of the time. It would be nice to go back there again someday.
We did not have delayed flights and the staffs at Lost Horizon are very accommodating. All our guides served as our cameramen. Looks like sanay na sila sa ganon. Although there were changes in our guides, Spencer made sure that he had a replacement and that he still checks on us once in a while during our stay there. It was only sad that we did not get to meet him. Anyway, there will be other times :).
To my Bohol travel buddies, I’ve truly enjoyed your company. Sa uulitin! 🙂 Pero sana sa susunod Ardee, wag mo na kaming tulugan na nakalock sa loob ang pinto! 🙂 Or kung makatulog ka man, siguraduhin mong kita ka pa rin naming humihinga hahaha. Torture sa amin ni Emie nung kinabahan kami dahil sa ‘yo eh haha.
For more pictures of this trip, check this.
Side note: In the middle of this trip, I realized something wahaha. Pero nakiusap ako kay Lord na bawal magbiro ng ganon haha!

Today is dolphin and whale watching day. Our guide (Rye) fetched us at exactly 5:45 AM so we had to wake up really early. 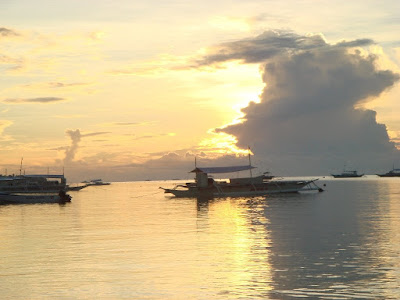 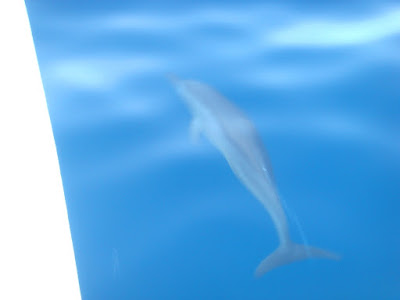 Dolphin watching
We were lucky to see a lot during our tour. According to our guide, the dolphins no longer play when the sun’s up. Amazing, amazing view. We were not able to take lots of pictures since it was hard to capture. We just had it in video. 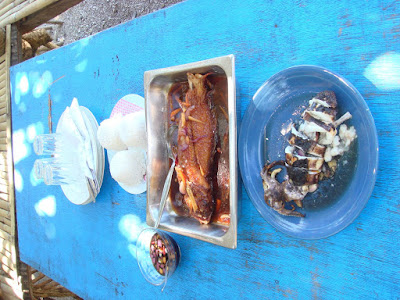 After the dolphin watching, we went to Balicasag Island for snorkling and brunch. The snorkling area is shallow. Kakatuwa pero nakakatakot pa rin hehe. (well at least for someone na takot sa dagat tulad ko :p) The guides also showed us the cave in the middle of the sea. After snorkling for more than an hour, we went back to shore to have our brunch. 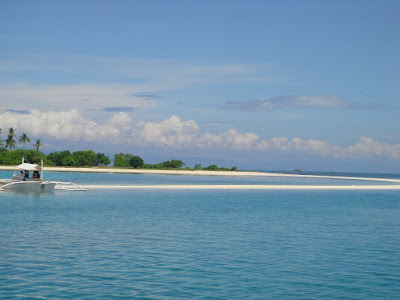 A visit in this area is not included in the tour but we requested it. It’s a must see! The small island is beautiful. Yung white area sa picture na karugtong ng island, sand yun na umaabot sa gitna ng dagat. Pwede mong lakarin hanggang sa dulo nya. It’s not dangerous because it’s not too deep. Amazing talaga to. But you need to go here during high tide only. Sasayad daw kasi ang bangka pag low tide.

We were back at the resort at around 1 PM and after a short rest, we again hit the beach for more swimming. We met Emma and Ethan. This time, we were able to talk to them and take picture with them. We learned that they are from Florida. Syempre tinanong naming kung saan sa Florida. Eto sabay-sabay naming tanong: “Where in Florida? Tampa?” Hahaha. Palibhasa, Tampa lang ang alam naming place sa Florida. They are such friendly kids.
We saw Rye who informed us that there’s a mass at Panglao church at 5 PM so we decided to attend. We left the beach at 3:30 PM to get ready for mass. It was Palm Sunday but they did not have any palaspas.
After the mass, we had dinner at The Powder Keg. It’s just walking distance to Alona Beach.
I requested for a massage but no one came which was also a blessing in disguise since I was already too lazy to do other things except be a bum for the rest of the night. While waiting for sleep to hit us, we used the time to talk about our personal life. Actually, si Ardee ang nagshare ng kanyang talambuhay haha. I’m not complaining. 🙂 It was actually nice to know you better buddy. And sorry Emie pag minsan nag-i-Ilocano na kami at di ka na makarelate hehe.

March 21, 2008 Mylene Leave a comment
Today is our Panglao Tour. We were supposed to wake up early so that we can catch the sunrise but we did not hehe. Anyway, we were fetched by Kuya Jerry at exactly 10 AM. He’s our guide/cameraman for the day.
Pit Stops: 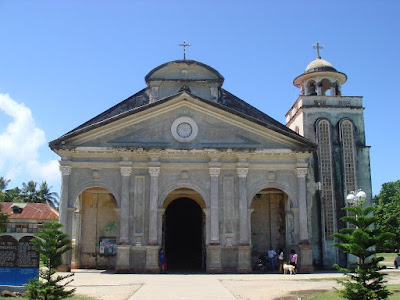 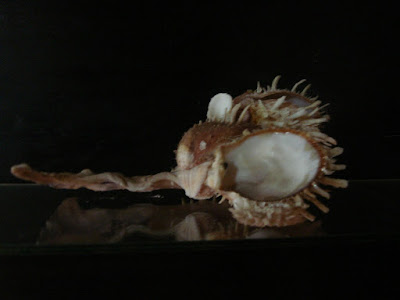 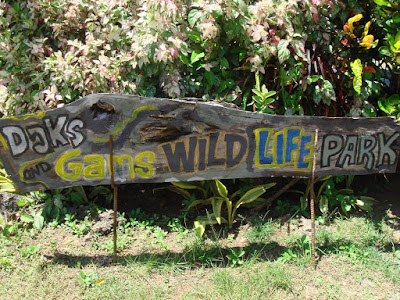 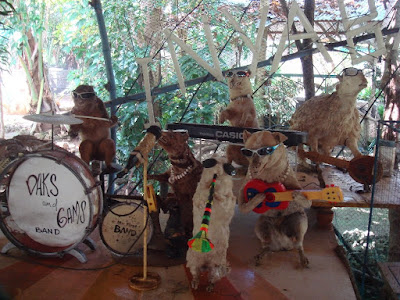 Daks and Gams Wildlife Park
There are several animals to see here. I was saddened by the place though because it was not well-maintained. But then, it’s still worth the visit. 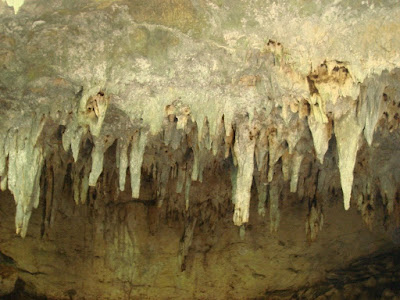 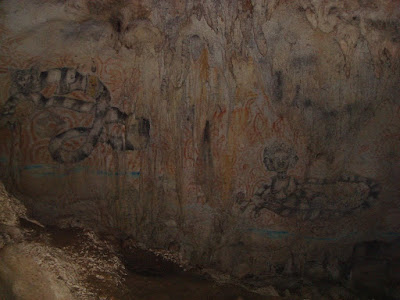 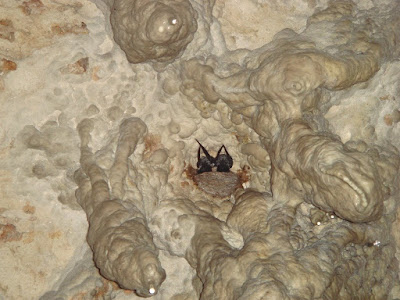 Hinagdanan Cave
There are bulbs inside to light the place. There’s a pool where people are allowed to swim. The lifeguard was kind enough to take our pictures (lots!). The painting above was painted by a foreign actor who filmed a movie in the area. The birds’ nest are also the ingredient of the famous bird’s nest soup. 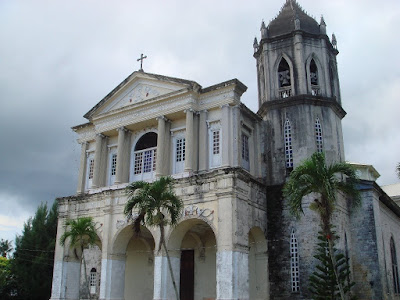 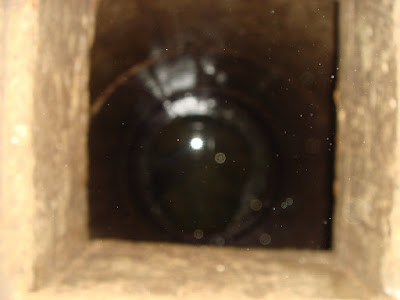 Dauis Church
According to the guide, the well served as the source of potable water for those stranded inside the church during the war. And by the way, this is not a wishing well. 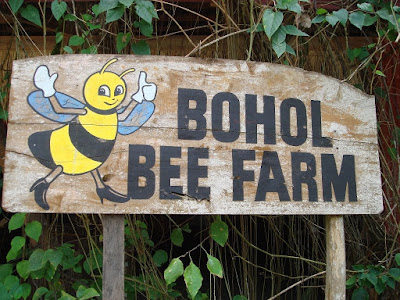 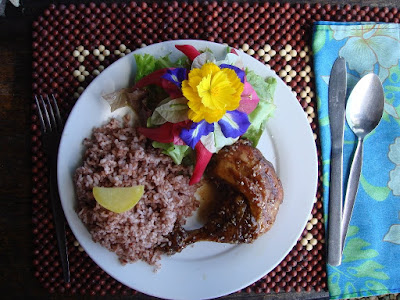 Bohol Bee Farm
The ingredients in their menu come from their farm directly so you can be assured of a fresh meal. For lunch, I ordered the honey glazed chicken and the home made ice cream for dessert. It was heaven. Yes, the flowers you see in the picture are edible, and part of the salad. 🙂 While waiting for our food, they also served us a sample of their camote bread with honey, pesto and mango dips. All their dips are delicious. Worth the money when you buy.

We were back at the hotel at around 4 PM. We planned to swim at the beach this time after a short rest but unfortunately, Ardee locked us out and we had a hard time waking him up. We just walked along the beach. We met two adorable siblings named Emma and Ethan.
At 7 PM, we went to the pool for a swim. Again, we were the only people. Nice timing hehe. For dinner this time, we went to Trudis Place.